Today was a rather relaxing day. Yesterday was the opening of the video installation exhibition and “the D day” of our stay in Luxembourg. Everything went well and I’m really happy to meet everyone. A big thank goes to Steve Hoegner, who helped us with everything, Chris Novak, who made the music for the video and gave a live concert on marimbas on the opening, Will Kreutz, the owner of the Goodbye Monopol, Sacha Bachim and all the other Feierblummers, Famul VideoLab and of course all the rest who helped us to make this project possible. “The Luxembourg Monster” is finally alive, it breaths and lives in Goodbye Monopol and it will be put back to sleep tomorrow evening.

Below you can see some photos from the opening:

Drinks waiting for the visitors.

Marimbas waiting for the concert 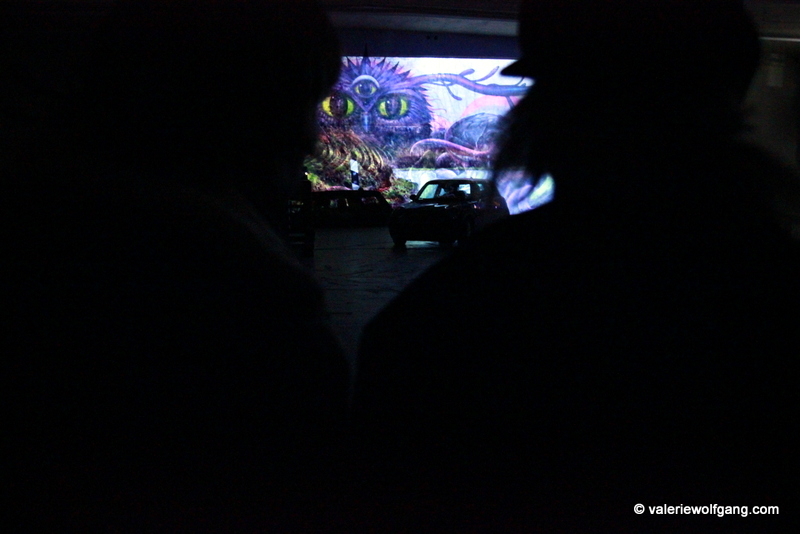 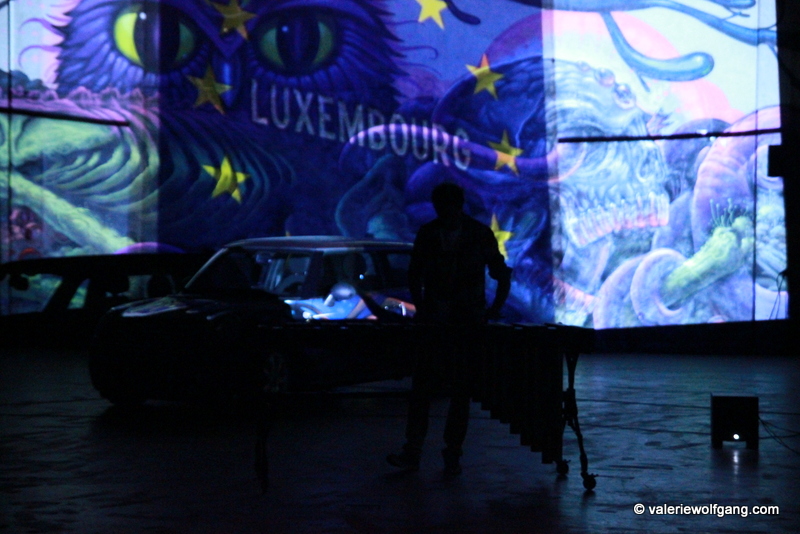 Chris Novak on marimbas. Amazing sound in the huge space! 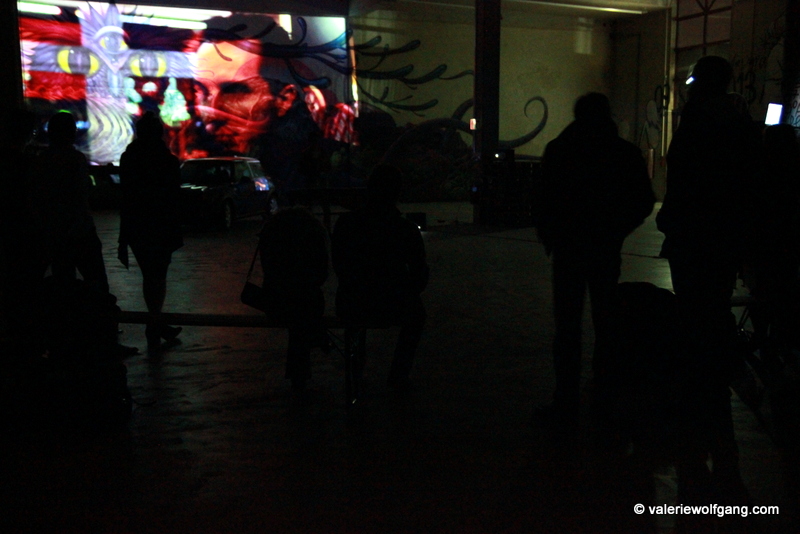 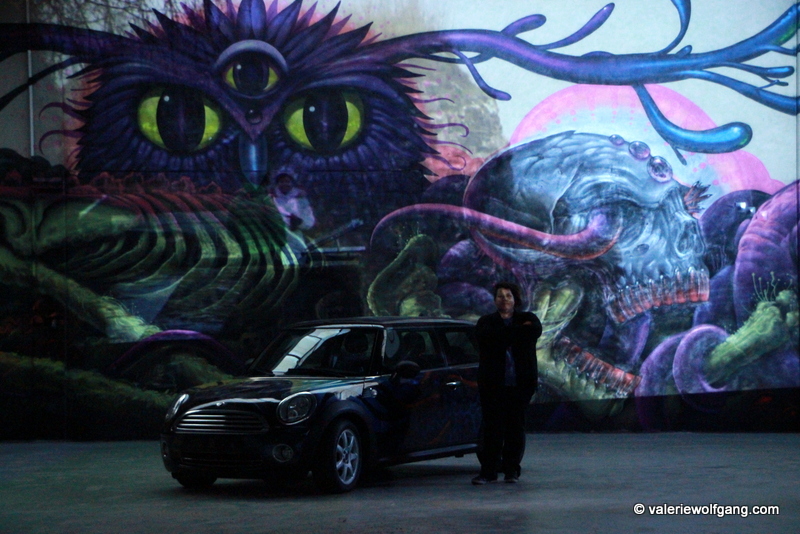 Valerie in front of the monster. 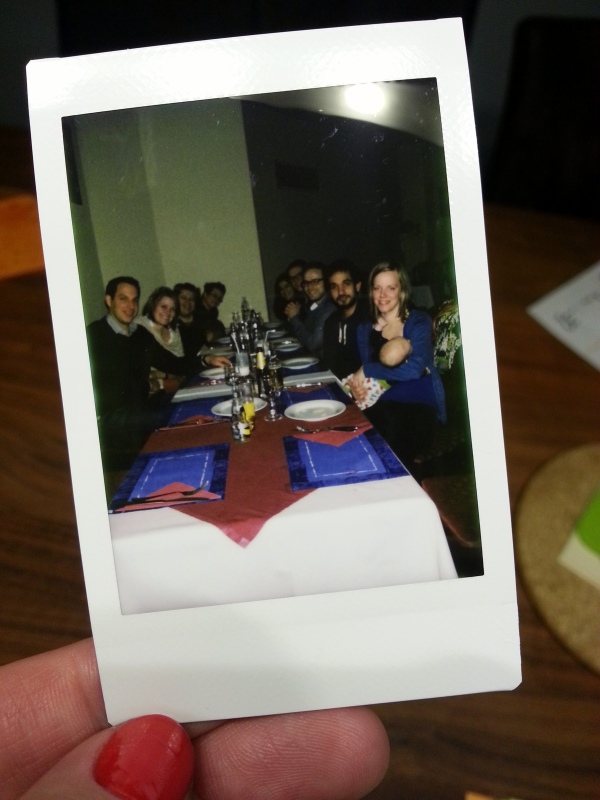 Delicious dinner after the opening in Indian restaurant with Feierblummers. 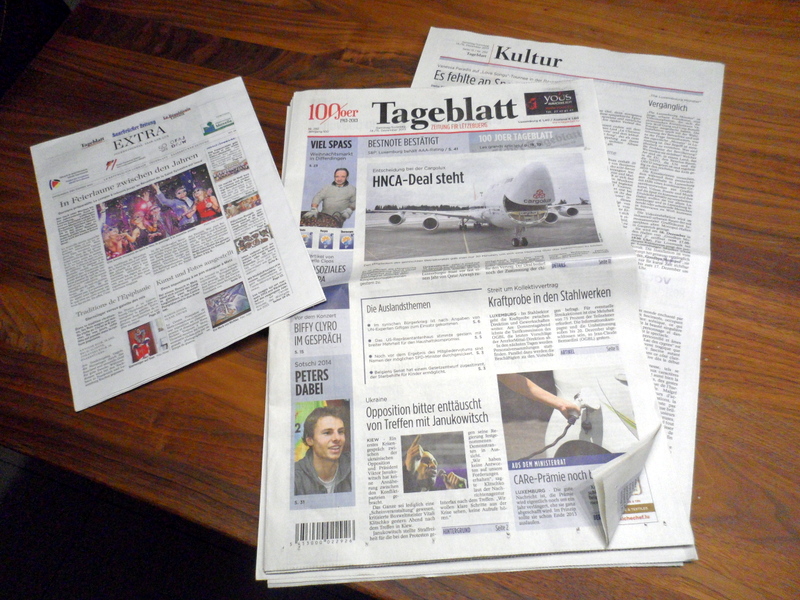 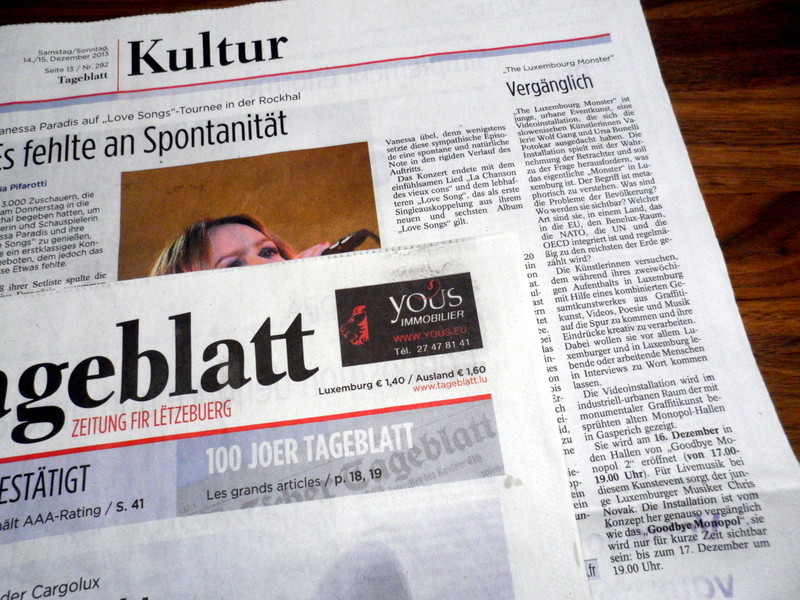 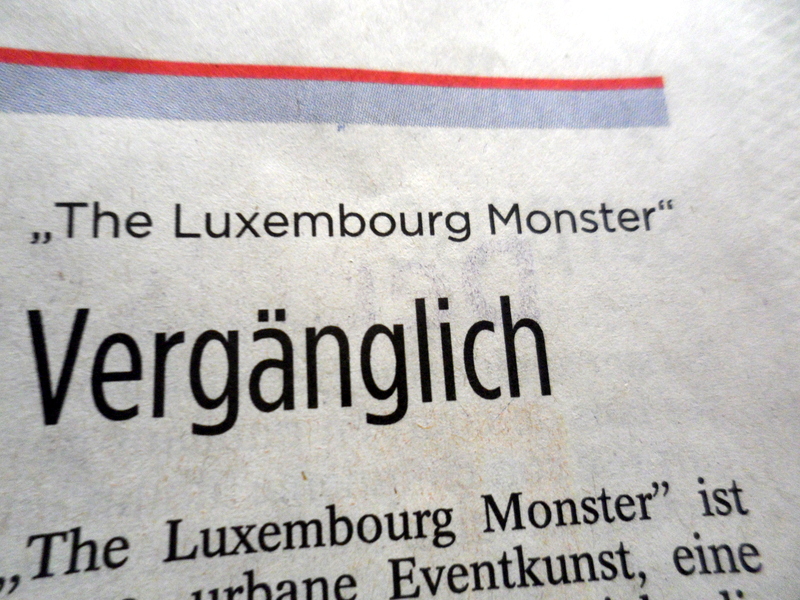 So yesterday everything was dedicated to the opening and we went to sleep quite late and today we stayed in bed longer then usual. But I managed to wake up before Urša and went out for a walk. I was really happy because the sun was amazing and it was shining all around. Luxembourg was brighter then ever and I saw it in bright new colors.

I stopped in local bakery and bought some croissants and a fresh baguette. I can’t help myself, since France is so close. Also I have to say that French language now sounds more familiar to me and I love to use at least some basic words. But traditional Luxembourgian language is still a mystery.

After our breakfast we went back to Monopol to take some of our things which we left there and had an appointment for an interview. And then we got a special visit by our Slovenian friend Tina and her young son Ezequiel, who both live in Luxembourg now. Unfortunately Scott (the father) couldn’t come so we planned a dinner for other time.

Now we will relax and make some plans for the next couple of days. There’s another project coming up, so stay tuned!

Here is possible to see the video which was made for the video installation.

“The Luxembourg monster” is a video installation which combines different artistic techniques (graffiti, video, sound). It is also an art piece which plays with the perception of the public: what is the actual monster in the installation? Artists Valerie Wolf Gang researches new surroundings and culture in Luxembourg and questions locals about the personal and economic problems they face in their country. As a representative democracy with a constitutional monarch, Luxembourg is headed by a grand duke and is the world’s only remaining grand duchy. Luxembourg is a developed country, with an advanced economy and the world’s highest GDP (PPP) per capital, according to the World Bank. Its historic and strategic importance dates back to its founding as a Roman era fortress and Frankish count’s castle site in the Early Middle Ages. It was an important bastion along the Spanish Road when Spain was the principal European power influencing the whole western hemisphere and beyond in the 16th–17th centuries. Luxembourg is a member of the European Union, NATO, OECD, the United Nations, and Benelux, reflecting the political consensus in favor of economic, political, and military integration. The city of Luxembourg, the largest and capital city, is the seat of several institutions and agencies of the EU. Short interviews with the locals will reveal if the situation is as good as the statistics or if there is something the public should know. Monster is a metaphor for the real life problems and the aim of the video installation is to find that monster and present it to the public with a real visual appearance and sound.

MORE INFO ABOUT THE ARTISTS